Most who know me know I've lived with moderate to severe hearing loss. I've worn hearing aids for 36 years and have gotten by quite well, functioning sufficiently in the world of school, career, and family.

My hearing loss has gotten gradually worse over the years, however. What started as a 45-50 dB loss in both ears when I was a child has become a 65-75 dB loss, possibly worse. A 100 dB loss is considered clinically deaf.

I got new, more powerful digital hearing aids about eighteen months ago and, already, they seem lacking. Maybe I'm more sensitive than I should be about not being able to understand people but I find myself constantly missing portions of conversations, constantly asking my kids and wife to repeat themselves, etc. The new hearing aids do a good job of amplifying and processing speech, but they do a downright horrible job handling music. Listening to music through the microphones in the hearing aids is no longer enjoyable unless I know the song by heart. Any time someone asks me to listen to something I'm not familiar with, it's just annoying.

My hearing aids do have telecoils and wireless audio injection capability which allows me to bypass the normal microphone circuit and send music directly into my ears. Using this with my MP3 player or computer is still enjoyable. This is how I listen to music when I run or while I'm working.

Right now, I'm frustrated. I want to continue to have good interaction with others and be a fully-functioning member of society but I worry I'm already near the edge of what hearing aids can provide.

So what are my options?

There is a whole category of hearing aids for the severely deaf called "power aids." Most hearing aid manufacturers tend to focus their product development and marketing on users who have mild to moderate hearing loss and only offer maybe one "power" product.

The big new thing for hearing aid manufacturers is Bluetooth Low Energy control of aids from mobile phones. This gives users the ability to stream audio (e.g. music) directly from their phones to their hearing aids, use their hearing aids as handsfree devices for telephone calls, as well as select programs, volume control, and other settings from a smartphone.

Unfortunately for me, these fancy-pantsy features are only available for users of recent Apple IOS devices like the iPhone, iPad, and iPod. Why they haven't released comparable software for Android devices like the Samsung Galaxy III (and newer), I don't know. The Samsung devices have the same BLE chipsets as the newer IOS devices. I'm guessing Apple has negotiated exclusivity with the hearing device manufacturers.

Because I've been using hearing aids seemingly forever, I'm less interested in fancy new bells and whistles and a lot more interested in fundamental features like:

I haven't found any wireless features that I enjoy using or find useful enough to keep using. The hearing aids I'm currently wearing feature wireless audio streaming capability, but once I found out it didn't support two-channel, stereo audio and instead sent one channel of audio to both hearing aids, I never wanted to use it again. I guess, despite a moderate-to-severe hearing loss, I'm somewhat of a music snob.

Over the last twenty years a few companies have introduced middle-ear hearing aid implants that work on the ossicles, the three tiny bones in the middle ear between the eardrum and the cochlea. 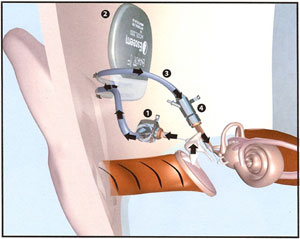 The first one I heard about is the Envoy Esteem implant. The Esteem made a big splash in 2010 when they ran a nationwide advertising campaign. A YouTube video of Sarah Churman hearing for the first time after getting her Esteem implant activated went viral. Envoy Medical was evidently so pleased with the attention their product was getting for the positive effect it had on Ms. Churman, they made an announcement while she was a guest on the "Ellen" show they would be reimbursing her mother-in-law for the cost of the procedure ($30,000) and would foot the bill to have her other ear implanted as well.

The Esteem is the only complete self-contained implant system where the patient's own eardrum is the receiving sensor, or microphone, of the system, a small computer is embedded under the skin, and an actuator attached to the ossicles sends amplified vibrations to the cochlea.

This year, I've been in touch with Ototronix, the makers of another ossicles implant called Maxum. Maxum is much less invasive than the Esteem and, I would assume, much less expensive. I haven't received any information on costs, but I'm guessing it's probably $5-10,000 per ear. The implantation involved minor surgery through the ear canal where the eardrum is lifted so that a small magnetic, titanium barrel can be affixed to the ossicles.

After the eardrum has healed, a hearing-aid like device is placed in the ear canal which sends electromagnetic waves through the eardrum to actuate the implant, thereby causing sounds to be perceived in the cochlea.

The Maxum device was apparently brought to market in 2001 and taken off the market in 2004. Ototronix reintroduced it in 2009, I'm assuming, with improvements.

Finally, there's the Med-El Vibrant SoundBridge. This device is more like a cochlear implant than the previous two. The implant consists of an induction coil that sits under the scalp skin and a wire that leads to an actuator attached to the ossicles. The user wears a processor attached magnetcally to the scalp which contains the microphone and sends signals through the induction coil to the actuator in the middle ear. I don't know what the cost is like for the Vibrant Soundbridge implant, but I would assume it lies somewhere between the Esteem and the Maxum.

One concern I have about middle-ear implants is they have an upper limit to how bad of a hearing loss they can compensate for. One [web page I read]( http://www.bcbsms.com/com/bcbsms/apps/PolicySearch/views/ViewPolicy.php?&blank&action=viewPolicy&noprint=yes&path=%2Fpolicy%2Femed%2FSemi+Implantable+Middle+Ear+Hearing+Aid.html&keywords=%3C!123-321!%3E&source=emed&page=id=169&me=index.php) indicated that an 80dB loss is the maximum these device can compensate for. That's discouraging for me because that puts me right close to the line and makes me wonder if I should not consider a middle ear implant at all.

Cochlear implants have become a common way to restore hearing for profoundly deaf patients. The implant consists of a string of electrodes that are fed into the snailshell-shaped cochlea in the inner-ear. The electrodes then electrically stimulate the hairlike fibers inside the cochlea that are connected to the auditory nerves.

Cochlear implant patients report great success understanding speech but frequently complain that music does not sound pleasant. This is a problem researchers are working on.

Cost for a cochlear implant procedure ranges from $45,000 to $125,000. It's not cheap and it's pretty dang permanent. While newer procedures allow patients to retain some of their original hearing, the implantation usually destroys whatever natural hearing the patient had.

Is there urgency or should I do nothing?

One caveat of not treating hearing loss that has been discussed in recent years within the audiology community is that untreated hearing loss seems to cause "brain atrophy." It would seem the auditory areas of the brain requires consisten stimulation to stay healthy and functional.

This may explain why some older individuals who procrastinate treating their hearing loss never quite regain their full function even after being fitted with hearing aids. Their brain has simply lost the ability to perceive and process speech like it used to.

It's all downhill from here >>
<< Book Review: "Dreamers and Deceivers" by Glenn Beck