Does Glenn Beck write his own books? I doubt it's possible. I believe his role is more like that of a film director or even a producer. With Miracles and Massacres and his latest offering Dreamers and Deceivers, I believe he picked which stories were to be told, what details were to be emphasized, and what the overall effect on the reader was to be. 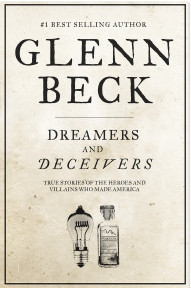 However these two books came together, it worked. Dreamers and Deceivers is another winning collection of short stories chronicling the lives of several individuals who made significant marks on our history. Some of them would be characterized as "good guys" and others would be "bad guys."

The first story in Dreamers and Deceivers &emdash "The Mysterious Case of the Disappearing President" &emdash stands out from the rest of the stories in the book because it doesn't really establish a strong antagonist or protagonist. It does, however, seem incredibly relevant given today's headlines and the public's increasing distrust of the government, particularly the Executive Branch.

Chapter five's story of Desi Arnaz, the on-screen and real-life husband of Lucille Ball, was one story that really stood out for me. His backstory as a refugee fleeing communist Cuba for America where he had to start over from scratch as a young boy has all the trappings of a quinticential American success story. Arnaz's fear rooted in his family's losses in Cuba that good things never last was a self-fulfilling prophecy in his life. Desi Arnaz's story is inspiring, but sad.

The seventh chapter was about early computer scientist Alan Turing. I'm sure this was a frustrating story to write without boring the non-technical reader with technical details that would fly over their heads. As a technical reader, I craved more of the technical guts that were excluded. Beck and Co. did a great job covering the necessary bases to produce a mostly accurate story of Turing's rise and unfortunate fall.

There are some links between the otherwise standalone stories that I enjoyed catching. The story on journalist Upton Sinclair in chapter six provides some great background for the story on state-department-diplomat-turned-convicted-communist Alger Hiss in chapter eight.

I loved how the book interwove its last two chapters on Walt Disney and the men behind Pixar, Steve Jobs and John Lasseter. A personal note from Glenn Beck on his reverence for Walt Disney and his intention to try to restore his vision, somewhat, appears at the end of chapter nine.