Last night I attended the opening social for BYU Linux Club, a new on-campus club at Brigham Young University in Provo. I was invited to the event by Tyler Johnson, the club's president after he came to a Provo Linux User Group meeting a couple months ago. I told Tyler I'd record video of the opening social.

At the opening social, Tyler got up and explained what they were hoping to achieve with the new club and invited everyone in the audience (about 40 students) to stand, introduce themselves, and say something about their experience with Linux. I got skipped in that procession because I was manning the camera in the back of the room. Nevertheless, it was fun and interesting to hear all these young people express their enthusiasm and passion for the open source operating system. Sure, some of them really didn't know much at all about Linux and they showed up because they wanted to learn more, but hearing a handful of those who had gotten their hands dirty talk about how powerful the Linux command-line is or how configurable Linux had me being washed over with huge waves of nostalgia. 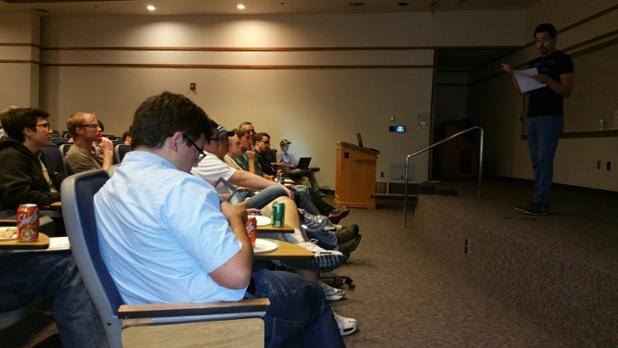 See, I was one of the founding members of the USU Free Software and Linux Club (or the "Free Software and GNU/Linux Club" if we were close to when we had Richard Stallman come and speak to us) back around 1999. Roberto, Joe, Nate, and I (and I'm probably forgetting some other key founding members so please forgive me) created this on-campus student organization to evangelize about Linux. We met others who had the same mix of enthusiasm and curiosity.

It was exciting to see some young women attended the opening social and even one, Rachel Coleman, is part of the club leadership team. When we ran USU FSLC, it was a very rare event when a woman would attend our events. We didn't intend for it to be so but it really was kind of a guy's club. It's very cool to see female interest on the upswing.

Bluehost technical recruiter Andres Betts was the featured speaker at the BYU Linux Club meeting. He has contributed to various open source projects, not the least of which is OpenSUSE. I thought Andres' presentation was a very good introduction to Linux for the somewhat uninitiated.

Utah Open Source helped the club by providing pizza and drinks for everyone who came.

I hope the best for Tyler and his fellow Linux geeks. It's still an exciting time to be learning about open source and how to participate in an amazing dynamic worldwide phenomenon that affects us more than most people realize.