The status of my documentary project

Since the beginning of 2015, I've been working on a documentary about a man named Ernie Jiminez who, on Memorial Day, set a new world record for furthest successful shot at a target with a rifle using open-sights.

This will be my first documentary and as such, I've been beset with a lot of questions, lack of confidence, and uncertainty. Having never done this before, I don't know what to expect. I know the story I want to tell and having read some books and articles about making documentaries, I have a general idea of what I'm doing, but I don't have specific experience doing this to lean back on. I'm learning as I go.

The first thing I've learned is that you simply can not gather too much footage. I thought I'd gathered plenty of footage of long-range shooters shooting at targets but it feels like I have a precious few minutes of it. I tagged along at Long Range Shooters of Utah events and had lots of opportunity to gather more footage.

I think I did well doing interviews both of Ernie and others. After recording those interviews, I went through each video file and created a transcription text file and from that text file, I pulled pieces for the script.

Act Three will encompass the actual event on Memorial Day. 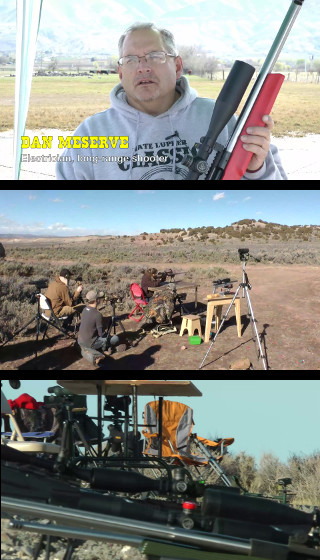 I've got Act One pretty much cut the way I like it and it comes in around six minutes long. Included to the right are some screenshots from the Act One video.

Music is still very much up in the air. I've been recording the narration myself so far but it's uncertain whether I will voice the narration in the final product. My good friend Thom Bowers has some experience doing voice acting so I may ask him to read the narration script and see how it works with the material.

I had anticipated doing the video editing in Final Cut Pro because it comes with render paths for broadcast-quality video. So far, however, I've been using Kdenlive in Linux because it is what I know best and it can product very high-quality lossless rendered output.

The decision on how to distribute this documentary is also looming in the background. I definitely think it will be available as a DVD or Bluray, but will also be available via online video streaming sites like Vimeo or YouTube.

My decision to make this documentary was not based on a desire to create a new revenue stream for myself, although that would be nice, but instead for the experience doing it.