My review of the film 'America: Imagine The World Without Her'

Tonight, I attended a screening of America: Imagine The World Without Her at the Draper, UT Cinemark theater. Accompanying me were my wife and two of our children (10 and 13). 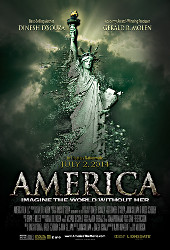 The theater the film was shown in was a small theater that probably seated a maximum of 70 patrons. Most of the other patrons in the theater, it seemed, were older couples. There was a family in the row in front of us with teenaged children.

Dinesh D'Sousa is a right-leaning guy who got his start in politics as a policy analyst for the Reagan administration in the 1980s. Knowing that going in is probably helpful, but not necessary. D'Sousa's previous film 2016 was extremely partisan in nature and was a start-to-finish attack on President Barack Obama disguised as an entertaining and informative documentary. This film, however, is somewhat different. America is more history lesson and less partisan politics. I would estimate only about ten percent of the film was spent criticizing the president or his administration and that didn't happen until nearly the end of the film.

America boasts of high production values, above-average acting, great music, and spectacular cinematography. The film begins with a scene depicting George Washington leaving his home and his wife to command troops in the Revolutionary War. Narrated by the voice of a lowly soldier penning a letter home, we learn he is about to lead his men into a gnarly battle and the odds are stacked mightily against them. The battle begins and soon Washington rides a horse into the fray, is struck in the chest by a sniper's round, and tumbles to the ground, blood soaking through his clothes. D'Sousa's voiceover asks us to consider all the events in history that brought America to where she is today and how different things would be had those events gone differently.

This sets an interesting stage, but then D'Sousa quickly changes direction and introduces us to Howard Zinn whom Wikipedia describes as "an American historian, author, playwright, and social activist." Zinn is most famous for the book A People's History of the United States

D'Sousa explains that Zinn and others paint a story of America where its history is based on theft:

Now, if this were your typical right-wing radio program, you might learn a little about some of these assertions that people like Zinn makes, but then they're simply dismissed as being ridiculous and not worth your consideration. Rah, rah! USA! USA!

D'Sousa, however, plays devil's advocate. I mean, we know ultimately, he's going to show that Zinn and his followers are wrong, but before he can do that, he really needs the audience to understand, maybe even sympathize, with their viewpoints. This was admirable and, honestly, pretty impressive. One friend warned me going in: "The first 30 minutes will have you questioning your sanity for sitting there." At the end of this thorough exploration of the idea that America has been built on the idea of theft from various people, it's pretty compelling and some may be asking "It's not really true... Is it?"

Then, D'Sousa knocks each of these targets down, one by one. Meticulously; Judiciously; And thoroughly.

He does this by mixing history we all know with history hardly anyone knows. Did you know up until the Civil War that the Confederate States had many free black plantation owners that owned thousands of slaves themselves? Have you ever heard of Madam C. J. Walker? Did Americans really deliberately kill swaths of Native Americans?

This intense rebuttal of the "America is the result of thievery" argument is perhaps the most interesting section of the film.

Then, D'Sousa introduces the audience to Saul Alinsky, a community organizer and activist that preached the line Zinn sells in his book. If you don't know who Saul Alinsky is, well, see the movie.

Because Barack Obama and Hillary Clinton were both disciples of Saul Alinsky, it's only natural the film then connects them as well.

Finally, D'Sousa asks the audience to consider if people like Zinn, Alinsky, Obama, and Clinton are wrong, what must be done to right this wrong?

Throughout the documentary, D'Sousa lavishes praise on presidents Washington, Lincoln, and Reagan. I think a great deal of Americans will agree these three were great presidents, but there were many others who were notable leaders as well and D'Sousa could have mentioned them as well.

I enjoyed the film quite a lot, even more than D'Sousa's previous documentary partly because it was so densely packed with interesting history.

America is rated PG-13 because of some graphic imagery, but I was fine with my 11-year old son watching it. My kids found some portions of the film boring, especially the bits that touched on the civil rights era. Generally, however, they enjoyed it.